Discover how customizable, cost-effective and reliable
BigCommerce is and why we built it that way. 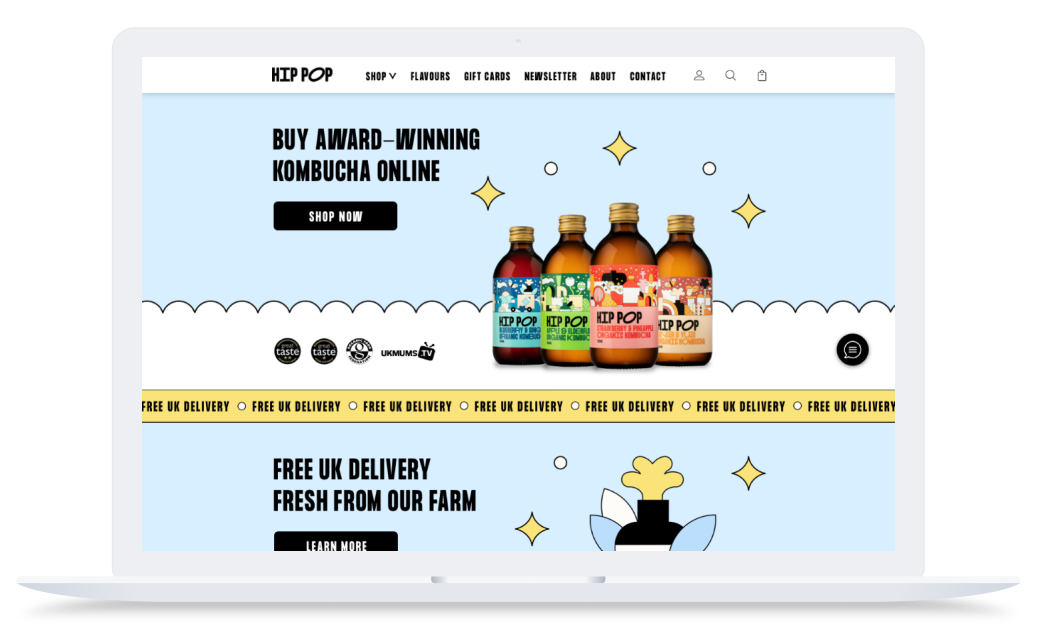 
A great recipe based on friendship

Good friends always have each other’s backs — or tummy in this case. When Kenny Goodman talked to his friend Emma Thackray about having irritable bowel syndrome (IBS), she made him try the kombucha recipe she developed while living in the US. The drink had such a profound effect on Kenny that he suggested to Emma they should start their own commercial kombucha range in the UK (where IBS is a fairly common issue). Hence the creation of Hip Pop.

Kenny and Emma set their sites on opening a small brewery on a nearby farm in Manchester. Noticing a gap in the market, their goal was to develop a product that was not only good for you but also looked good and tasted great.

Getting online fast with little experience

The two quickly start selling their products in local coffee shops, developing a strong B2B network. At first, they had no intention to get into ecommerce. “Selling drinks online is notoriously difficult. Besides, we didn't have any ecommerce experience in the business,” explained Kenny.

But all that changed when COVID-19 began spreading and local coffee shops started to close. Suddenly, not being online didn’t seem like an option if they wanted to keep their business alive.

Forced to find another channel to generate revenue, they turned their attention to launching a direct-to-consumer (DTC) website. Kenny reached out to Peter Bacani, now the company’s Website Developer, who did some research and suggested getting started with a BigCommerce Pro plan. “We wanted a platform that allowed us to start trading quickly, explained Bacani. We picked BigCommerce because when compared with the other platforms on the market, it’s easy to manage, highly reliable and cost-efficient.”

It took only a few months for Peter and Kenny to build the online store and officially launch their DTC website in January 2021. It was a brand new experience for Kenny, who knew very little about selling online, but he applied his lead generation experience and can-do attitude and decided to learn along the way.

“We tried a few things that failed, I must admit, he said. One of them was selling people straight into a subscription. But no one would do it because they hadn't tasted the product first. So we created a no-brainer offer to start with at a really low price. We kicked off with a taster kit, then we told shoppers about the subscription offer. That works much better.”

To help them build and implement their subscription products, the Hip Pop team used a plug-in called Rebilia. They also leveraged Klaviyo as a customer relationship management (CRM) tool to generate more subscriptions and improve their client retention stream. BigCommerce’s pre-built Google BigQuery integration has also been a great addition. Peter was able to build a custom dashboard that gives them visibility into the most meaningful data they need to build custom applications in the future.

"We picked BigCommerce because when compared with the other platforms on the market, it’s easy to manage, highly reliable and cost-efficient.” 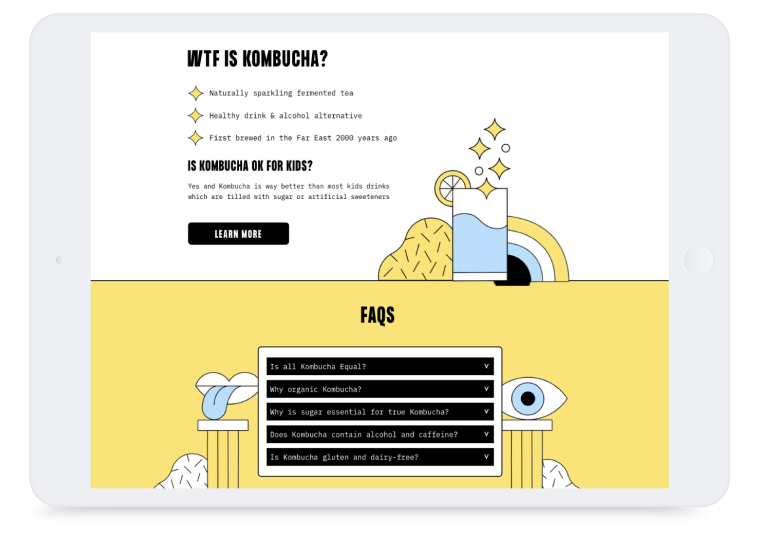 Traffic and revenue start popping off

In addition to gearing up with multiple technological solutions to ease their day-to-day operations, the Hip Pop team also took advantage of BigCommerce’s integrations with Facebook, Instagram and Google to increase brand awareness and drive traffic to their new online store.

“The good thing about BigCommerce is that you can start with a small plan so finance shouldn't be an issue. ”

Keep testing until you get it right

Now that coffee shops have reopened, maintaining the online selling hype and subscriptions is the Hip Pop team's current challenge, but Kenny certainly has no regret regarding launching an online store with BigCommerce. In fact, he recommends other small businesses follow in his footsteps.

“The good thing about BigCommerce is that you can start with a small plan so finance shouldn't be an issue. If it is an issue, you're probably not fully ready for ecommerce anyway, because you've got to invest in resources to drive traffic to your website.”

Sharing a few helpful tips based on his own ecommerce experience, Kenny added, “Try driving paid traffic because it will help you test things out. And read up on conversion rate optimisation. It's not rocket science and there are many existing templates you can use in your campaigns. The bottom line is: don’t be afraid to try. Learn as much as you can and keep testing until you get it right.”

See More On These Topics